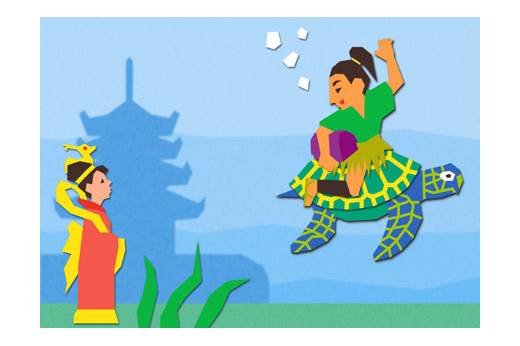 Long long ago, there lived a young man called “Urashima Ziro” who liked big talks.
“Some day there must be someone to meet me, and I’ll go to ‘Ryugu-Castle’(Dragon Castle under the sea) to marry princess.
One day he met a big turtle on a beach.
“Mr. Urashima. I’ll take you to ‘Ryugu’. Please ride on me.”
The turtle with him on his back went underwater in full speed.
“Mr. Urashima, that is ‘Ryugu-Castle’.” said the turtle to him.
“Is it really ‘Ryugu’? It’s so old.” said Urashima, surprised to see it.
“Mr. Urashima, many, many years have passed since ‘Ryugu’was introduced in one of old stories. It is natural that the castle be old now.”
“I see.”
“Anyway, Why don’t you come in?”
Entering the castle, he was so shocked to see an old man sitting on a broken chair, who was king of the castle.
“Mr. King, I thank you very much for inviting me.”
“Pardon? I can’t hear you. I am hard of hearing.”
“Mr. King. THANK, YOU, FOR, INVITING, ME.”
“Invite you? I never invite you.”
“Don’t you know me? I am a very famou s man in Japan. I’m a kind and gentle man called ‘Urashima.’”
“Urashima? I don’t know.”
“All Right!”
He gave up talking with king and went into a garden to meet princess.
“Where is princess? I’d like to meet her.” asked he an octopus.
“She has been serious ill in bed for years.”
“Serious ill?”
“Yes, and you were invited by her. She needs a heart of monkey to recover herself.”
“Heart of monkey?”
He was horrified to know he was mistaken for a monkey.
Finding a magic box in a storehouse, he swam up the sea desperately with it.
He got so tired and thin like an old man when he returned to the village that nobody noticed him.
“I have been to ‘Ryugu’. This is a magic box.”
He spoke to the villagers, who never believed him only to laugh at him.
He was so disappointed that he at last opened the box.
A smoke came out of it as everyone had expected.
But this time there was a baby crying in front of the box on the beach.
Nobody noticed any longer who he was.
Nobody knew what had become of him after that.