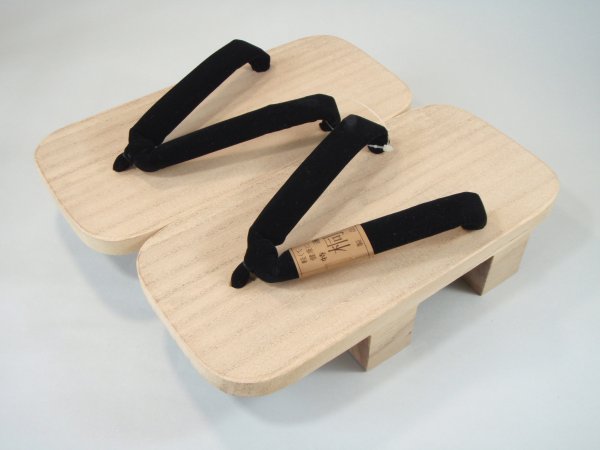 “My Uncle. My mother has been still sick in bed. We need more money. Please lend me some money again.” asked the boy to his uncle.
“I never lend money to anyone who won’t return the money I lent.” said his uncle, refusing to lend money.
On his way home he was at a loss what to do under a big tree, where he fell asleep.
In his dream, an old man like a shinto-priest came to him,
“Young boy, what are you thinking of so seriously?”
“I am hard up for money as my mother has been sick in bed.”

The old man took out one pair of clogs from his Furoshiki(cloth wrapper), each of which was a little different in size.
He said to the boy,
“Put on these clogs. It is so difficult to walk on them that you’ll be able to fall down easily. Whenever you fall down, one silver coin will come out of it. But whenever you fall down, you will be shorter and shorter. So you must fall down only when you do need money.”
He woke up to find the very pair of clogs near him.
He wondered if what the old man had told him was true or not.
On walking in them, he fell down at once, when he found a silver coin under them.
He was so delighted that he bought some medicines for his sick mother and a little rice and so on.
A few days later, his uncle came to his house to get back the money he had lent.
The young boy talked about the clogs to him.
“That’s fantastic. Well, why don’t you give me the clogs instead of the money I had lent?” said his uncle to the boy.
“No, I never give you this clogs.” rejected the boy firmly.
His uncle would not listen to him until at last he robbed the boy of them and returned home.
As soon as he came home, he put them on in a room and fell down many times on Tatami mats.
He was so happy to see many silver coins lying in the room, but he didn’t notice his body was being smaller and smaller whenever he fell down.
The young boy was so anxious about his uncle that he visited him.
“My uncle, where are you?” asked he several times.
“I’m here. I’m here.”
The boy went toward the small voice and saw a tiny man falling down again and again in the corner of the room full of many coins.