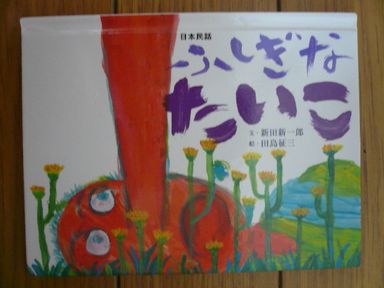 Long long ago, there lived a young man called ‘Gengoro.’
He found a small drum near a river.
Whenever he beat the drum, saying, “Nose, longer.”,it made his nose longer.
“Nose, shorter.” It made his nose shorter whenever he beat the drum.
One day he set out on a journey with the drum.
When he saw a beautiful young lady passing before him, he said in a small voice, beating the drum.
“Her Nose, longer and longer.”
She was a daughter of Choja’s(Millionaire) in the village.
Her parents went to doctors, priests to cure her of her long nose, but in vain.
They lamented over her misfortune until at last they put a bulletin board here and there in the village;
‘THOSE WHO CURE MY DAUGHTER OF HER LONG NOSE WILL BE GIVEN MUCH REWARD. Choja.’
The young man in a few days visited the house.
“I am a doctor of nose. I’ll cure your daughter of her long nose.”
Her nose was two meters long.
“It will take me ten days to cure her.”
He beat the drum for ten days, saying “Nose of hers, shorter.”
In ten days she had an ordinary nose.
He was given much money by her father.
One day he was playing the drum lying on a field, saying,
“Nose, longer and longer and longer.”
As he beat the drum so many times, his nose got higher than mountains, clouds.
At last it got to heaven, where the carpenters were building a bridge.
They saw a strange pole coming up from below and tied it against a pillar of the bridge with a rope.
On the other hand, he got tired of playing the drum.

“Nose, shorter and shorter and shorter.”
Though his nose got shorter and shorter, as it was tied against the bridge, his body went higher and higher up to the bridge in heaven. “Oh, my God.”
Just then, a Thunder God happened to pass by and set him free.
“It’s a season of thunder. I am so busy that I need your help.” said the God.
He helped the God with his business for a few weeks; sprinkling water, making thunder.

One day, he made a false step on a cloud and fell down from heaven to earth with deadly speed into a big lake called ‘Biwa-lake’in Siga prefecture.
Nowaday, you can find a big carp called ‘Gengoro.’ in the lake.