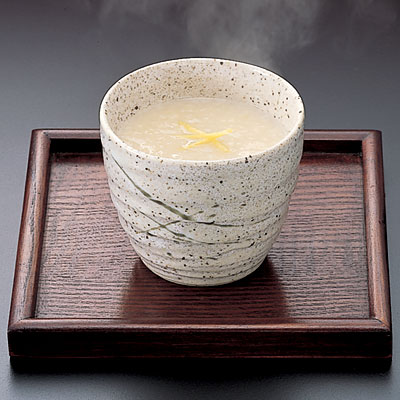 Long long ago, there lived a Buddhist priest and his young disciple in a mountain temple.
The priest was so mean that he never gave the young boy sweets he had been given by the supporters of his temple.
One day the priest was given ‘Amazake’(sweet beverage made from fermented rice) by one of them.
When he went working on Buddhist memorial service, he said to the boy,
“Listen to me. This is a poison called ‘Amasake’.
If you drink it, you will die at once.
So never drink it. Do you understand?”
The boy was left alone in the temple and said to himself,
‘My master told me that if I drank it, I would die at once.
But I’m sure it is a lie. He must have said so for fear that I should drink it.’
Opening the pot, he licked it a little with his index finger.
“Wow, I have never tasted such a sweet drink before.” thought he.
He licked and licked it again and again. It was impossible for him to stop it.
“It’s delicious. A little more.”
As he found that he had drunk it up, he became anxious about it.
“Oh, my God. What would happen if my master came home? I will be severely scolded and hit by him and ….. What shall I do?”
After thinking for a while, he thought up a good idea;
The temple had a big Dharma doll made of clay in a room, which he kicked and broke into pieces.
When the priest came home, the boy pretended to cry, sitting on a porch.
“Mr. Boy. What’s the matter with you? Why are you crying? What happened to you?” said the priest.
“My Master. I’m so sorry. When I was cleaning in the room, I happened to break the Dharma doll.
I thought I couldn’t live any longer. So I drank ‘Amasake’ you had told me not to drink.
I drank and drank until I died, but I can’t die yet.”
The master laughed at him loudly and said to the boy,
“You are so clever. Ha-ha-ha-ha. But I’ll punish you.”