Long long ago, people believed that gods created all the creatures and decided rules for them so that everything would go fine.
A god, whose job was to create animals, had made all the animals and given lives to them.
But he hadn’t decided precisely what kind of food each animal should eat.
Meanwhile animals could survive without eating for a while.
Soon they realized that their strength was gradually losing and felt tired.
They didn’t know why.
Then a snake, who was the cleverest of all, said,
“We have to eat something to maintain our strength.
I think the feeling we are having now is maybe ‘hungry’.”
The rest of the animals asked the snake,
“If what you said is right, tell me what we should eat.”
“I don’t know.
But the god who created us knows everything.
Let’s go to the god and ask him who should eat what,”
the snake suggested.

All the animals went to the god and asked timidly,
“Our Lord, thank you for creating us, but we don’t think you have given us any hint on what we should eat.
Would you mind telling us what to eat? Or we will all die soon.”
The god was busy creating animals one by one, so he scarcely had time to think about it, but he understood their problem exactly.
He said to the animals,
“Everybody, I should have decided who should eat what kind of food before you all came to me.
I’ve been a little bit busy recently, so I couldn’t decide it until now.
I’m so sorry about that.
All right, I’ll think about it tonight, then tell each of you tomorrow morning.
Is it all right with you?” 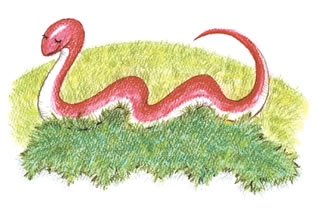 The god’s proposal pleased them.
Their hearts swelled with hope.
Next morning, as soon as the dawn broke, all the animals hurried to see the god again.
Of course the snake was one of them who was looking forward to hearing the god’s decision.
That’s why he started earlier than most animals, but soon he was caught up with and overtaken by them.
There was a frog among them.
She spoke to the snake, when she caught up with him.
“Hi, Mr. Snake. You are walking so slowly.
Why don’t you walk a little faster and go with me together to the god?”
“Oh, hi, Ms. Frog.
Go ahead, please.
You can see the god ahead of me.
He will be waiting for you.
Please tell him I’m coming soon,”
the snake said, gasping and panting.

“I’m sure you can walk faster, Mr. Snake. I really want to go with you.”

“I’d like to.
But I’m so hungry that I can’t walk as quickly as you.
All I can do is to crawl on the ground like this,”
the snake said to the frog.

The frog was a little upset.
She thought that her well-intended proposal had been refused.
“All right.
If you say so, you can come after me, and lick my ass,”
and with that parting shot, the frog leapt lightly ahead of the snake.

And soon she was gone far away out of the snake’s vision.
When the frog arrived at the god’s place, some animals had already been there, and gotten the god’s answers.
The god was telling each of them what to eat like this,
“Cows, and horses, you can feed on grass.
You can find grass everywhere around you, so you’ll never feel hungry from now on.”

“Dogs and Cats, you’ll be fed by human beings.
They will treat you nicely if you serve them properly.”

“Moles, you can eat worms in the soil.
Under the ground, you’ll feel cool in summer and warm in winter.”

At last the frog’s turn came.
The god said,
“Frog, you can eat insects.”

When she heard this, she felt happy.
She thought she could easily get insects around her.

When she was about to leave in a good mood, the god added,
“Frog, you made a fool of the snake on your way here.
So I’ll allow the snake to lick your ass, because you told him to do that.
I take that that’s your wish.”

The frog was surprised, and said,
“Don’t take it seriously.

But you know the god never changes his advice.
Just when the god said to the frog, the snake arrived and heard the god’s words.
The frog was terrified of seeing the snake.
She said to him with a trembling voice,
“Please forgive me for my—.”
Before the snake heard her apology, he approached the poor frog from the back and swallowed her at once.
You’ll already know that wasn’t the snake’s intention, but the god’s decision.
Even today, as you can see, whenever snakes see frogs, they swallow them from the back at once.