A son of Dragon

A son of Dragon 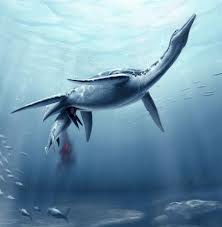 Long long ago, there lived a grandmother and a child called ‘Taro’ in a mountainous village.
One day he asked her,
“Grandmother, where is my mother?”
“When you grow up, I’ll tell you. Be patient until then.” said she.
On summer day, he went swimming with his friends in a lake in the mountain.
He in the water swam fast as if he were a fish.

“Taro, I hear your mother is a dragon.
It is natural that you swim well.
You are the son of the dragon.”
said one of his friends.

The words always remained in his mind.
One day, when he was working in a field, a villager came to him and said , pointing the lake.
“Taro, when you are big, we want you to irrigate our fields from the lake. If so, we can grow rice.”
He made up his mind to do so some day in the future.
A several years have passed and he was a good boy.
The day at last came when the grandmother told the truth to him.
“Taro, never be surprised.
Your father is a gold dragon living in heaven, while your mother is a silver dragon living in the lake.
So you are the son of God.
When you were born, I was asked to raise you not as a son of God but as a son of human beings.
You have not only power but also kindness, knowledge and courage.
I want you to irrigate our fields from the lake so that we can grow rice.”

“Grandmother, I thank you for telling me the truth.
As I have been told I am a son of Dragon, I was never surprised at your words.
From now I’ll irrigate our fields from the lake with my mother.”
said Taro in his brave voice.

On the next morning, he called his mother beside the lake.
Soon the water waved heavily and there appeared a huge dragon on the lake.

“My son, I have never forgot you for even a day. I saw you grow up from under the lake.”
said his mother.

“My mother, I have also wanted to see you since I was a small child.
I would like to thank my villagers for irrigating their fields from the lake to grow rice with the help of you.”

As soon as he said so, he jumped into the lake and up the back of his mother.
“You have gentle mind.
I can do anything if you are there.
I’ll hit myself against the rock and break it into pieces.
I may have my eyes damaged, so you must guide me on my back.”
said the dragon.

As soon as the dragon with her son on the back dived under the water, she hit herself against the rock with her all might.
The sound continued for several days and the lake became red because of her blood.
At last the rock broke into pieces and the water in the lake flowed toward the fields like a waterfall.
The dragon with him on her back flew up from the lake into the sky.