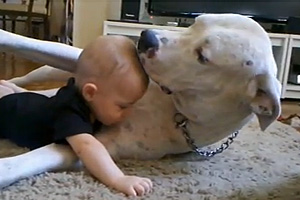 Long long ago, there lived a young man, his wife and their beloved baby in a village.
One day she went shopping in a town, while her husband stayed at home looking after his son.
Soon a villager came to him with a message that he should come to the meeting at once.
He left his dog near the child to protect him from any danger.
He had raised the dog at home like a child since it was born.
As soon as he left home, a big snake suddenly crawled toward the infant from somewhere.
The dog, seeing the snake, attacked and bit to death to protect the baby.
One hour later, the dog saw the master coming home in the distance and ran toward him, swinging the tail and stained with the blood of the snake around the mouth.
On seeing the blood, he thought, ‘Oh My God, my dog killed my son.’ and in anger he struck to kill the dog on the spot with a stone.
When he went into the house, he found his son asleep safe with the snake killed near him.
He knew everything.
When his wife returned and learned what had happened, she said to him,
“Why didn’t you think before killing the dog which had been like your child?”
They felt deep sorrow for the dog but it was too late.