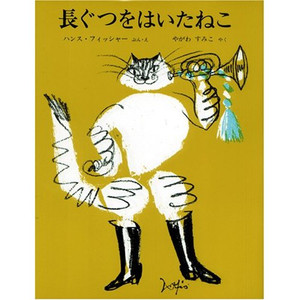 Long long ago, a poor farmer, who had three sons, died suddenly.
The eldest son was given a house and a water mill.
The second son was given a horse.
The youngest son was given only a cat.
“I am so unlucky.
My brothers can make flour at the water mill by helping each other.
But I can do nothing but starve to death with this small cat.”
The cat said to him,
“My master. Don’t be so discouraged.
I’ll make you happy and rich.
I am a clever cat.
I have a plan.
So please make me a big cloth bag and a pair of long straw boots.”

The cat in long boots, with the bag on his shoulder, set off toward a wood with a bounce in his step.
He put carrots into the bag and waited for a rabbit to come.
“Stupid rabbit. Come and eat carrots.”
Soon a rabbit jumped into it.
He caught her quickly and went to a Lord carrying her in his bag.
“Your Honor Lord. I have a present from my master.”
The Lord was so pleased with the rabbit and thanked the cat.
After that he caught animals in the wood and took them to the Lord several times, saying “This is the present from my master.”
One day the cat said to his master.
“His Honor lord will come to the wood with his beautiful daughter.
I have a plan.
Do as I tell you to.
You have only to swim in the river.
Trust me.”

“I see.” said the master.
Soon a covered wagon pulled by cows passed by the river, when the cat cried in a loud voice.
“Help! Help! My master is in danger. He is drowning. Help him!.”

“That is the cat that brings me presents.
Help his master at once.”
ordered the lord to his men and helped the master.

“Thank you very much for helping my master,
but he had his clothes stolen by a robber.”
said the cat.

“That’s too bad.
I’ll give him my best clothes.”
said the lord and ordered his men to take them out.

The master in the best clothes looked so handsome that the daughter fell in love with him at the first sight.
The daughter said to her father.
“Would you mind him riding the wagon with us?”
“Of course, not.” said the father.
The cat ran to the farmers in advance who were working in a rice field and said to them,

“His Honor lord will come here.
If you are asked, ‘whose farm is this?’ you must answer, ‘This belongs to the master.’
Otherwise you’ll have bitter experience.”

They were so surprised and answered as they were told to do by the cat.
The cat ran to the next farm and said the same thing.
“Whose farm is this?” asked the lord.
“This belongs to the cat’s master.” answered the farmers.
The lord said to the cat’s master.
“You have so many fields, don’t you?”
“Every year we’ll have a great deal of harvest.” said he proudly.
The cat ran and ran to the big house where ‘Oni’,a demon lived.
“Mr. Oni. I have a question for you.
They say you can change yourself into anything.
Can you change yourself into such a big animal as a lion or an elephant?”

“It’s a piece of cake. I’ll change myself into a lion now.”
said the demon.

The cat was so surprised to see a lion that he jumped up to the ceiling.
As he saw the lion change back into a demon, he came down the ceiling.
“I got so scared. You are wonderful.
” He praised the demon.
“But you can’t change into such a small animal as a rat or a mouse, can you?”
“I can’t? Look at me.” said the demon angrily and changed into a mouse and ran about over the floor.
“Lucky.” said he to himself and jumped on it and ate it up.
The lord and his men dropped in at the big house.
“Whose house is this?”
“This belongs to my master.” answered the cat proudly.
There was a wonderful dinner prepared for a party.
The daughter was now so happy to be with the master of the cat and her father also came to think of him as her husband.
“I would like you to get married to my daughter.”
The youngest son became happy and rich thanks to the small cat. The cat no more ran after mice.