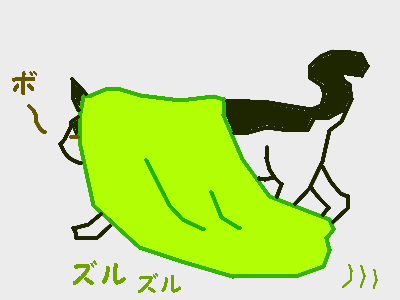 Long long ago, there lived an old cat in a family.
The wife said to her children.
“Tonight your father who doesn’t like hot noodle is out of home for a village meeting, so we’ll eat it for dinner.”
At that night on his way home the husband overheard someone talking with someone at a grave yard in a village temple.
To his much surprise, he saw a group of cats with their heads covered with Japanese towels.
“You were so late tonight, weren’t you? What’s wrong?” asked a cat to the old cat.
“Tonight I had to eat hot noodle for dinner. So it took a long time to eat it up.”
answered the old cat.
On returning home, he asked his wife.
“Did you eat hot noodle tonight?”
“Yes, but why do you know?”
He talked to her the whole story.
“So I knew why our towels disappeared these days.
But the old cat is said to become a ghost.
What shall we do?”
said the wife.

“The best way is, though it is cruel, that there is no way but kill him.”
That night he had a strange dream;
The cat sat in front of his bed and said to him.
“Please never kill me.
I’ll teach you a good thing.
If you learn how to cauterize old people with moxa, you’ll be successful.”
He found the cat nowhere after that.
A few months later he mastered moxibustion.
His technique became famous and known in his country.
Many old people came to him and he got a fortune.