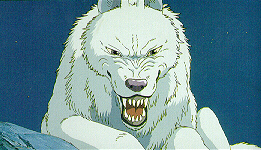 Long long ago, there lived a dealer in kimono fabrics in a town.
One day he was on his way home walking along the mountain road.
It was already dark.

He heard wolves howling and, what was worse, coming to him nearer and nearer.
The number of wolves seemed to become bigger and bigger.
“What shall I do?” he looked around and saw a tall tree.
“I’ll climb this tree.” he said to himself.
He sat on the branch of the tree.
“Oh, my God!” he sighed.
Thousands of wolves were surrounding the tree, howling or jumping or climbing in vain.
“It is impossible to catch him on the tree.
We had better get good advice from the clever cat.”
said a wolf.

“That’s a good idea.” said another one.
Some of them went into the woods and returned with a cat in a few minutes.
“Dear cat, what shall we do to catch the man on the tree?” asked a wolf.
“Let me see. Oh, you have only to use a wolves’ ladder.” said the cat.
One big wolf sat down on the ground under the tree and
another wolf sat down on the former one and
another one sat and sat on the former ones until at last ten wolves sat down on each one.
The merchant was so afraid that he pulled something soft in a hole of the tree with all his strength.
“What are you doing?” cried a bear in the hole and fell down the ground.
“The wolves attacked the bear, but the bear was much stronger than the wolves.
“What a strong man he is!” cried the wolves and ran away into the forest.
“So afraid! So afraid!” said the man.
He climbed down the tree and walked fast toward his home in safe.