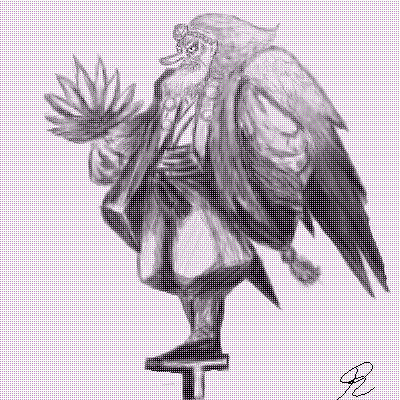 Long long ago, there lived a gambler in a town.
One night he lost all the money in gambling.
On his way back, he heard someone calling in a loud voice, as he was coming home in despair.
He looked around.
That was a Tengu(A long-nosed goblin) on a tall pine tree.
“Hey, Gambler. Are you a loser tonight, too?” asked Tengu.
“I wondered who was calling me.” he said.
“You’re Tengu, aren’t you? I’ve never been a loser. I just lent my money.” he wouldn’t admit that he was a loser.
“Ha, Ha, Ha.” laughed Tengu.
“By the way, Gambler. What in the world are you afraid of most?”
“Well….Oh. It’s Manju(a steamed bun).
The mere thought of one makes me feel bad and I can’t breathe…Oh, I’m afraid of Manju.”
“By the way, Mr.Tengu. What are you afraid of most?”
“Well….Oh. A sound of gun. That’s the one I’m afraid of most!”
Mischievous Tengu suddenly began to throw many Manjus over him from the tree, trying to frighten him.
“Oh my God. How rude you are! What are you doing? Are you trying to kill me?”
The gambler, who pretended to be afraid of them at first, began to eat one Manju after another.
When he ate Manjus to his heart’s content, he imitated a sound of gun in a loud voice.
“Bang!”
Tengu was so surprised at the sound that he flew away toward the mountain.
“Ha, Ha, Ha. What a foolish man he is!” he laughed.
Looking up at the branch where Tengu was sitting, he found a gourd Tengu had left, which was said to produce anything you wanted.
“Sake, come out. Fish, come out.”
The gambler sat under the pine tree and enjoyed himself until the midnight