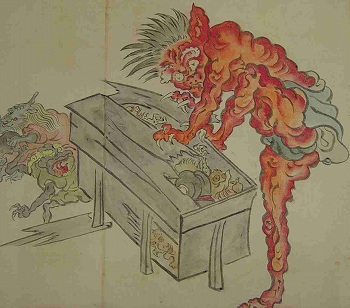 This is a story from the late Edo era.
One summer night, two men, who’d drunk too much, were reeling down along a narrow path.
The path led them to a cemetery.
When they came near the entrance of it, they found a straw sack lying by the path.
“What is it? Looks like a straw rice sack.” one said.

“Check it,” said the other.
The first man opened the sack.
“Full of potatoes!” they cried.
“But who left this sack here?
Do we have to take it to the guardhouse?”
one asked.

“I don’t know.
Maybe it’s a gift to us from heaven.
Why don’t we divide the potatoes into two?”
said the other.

People were afraid of ghosts, but loved ghost stories.
That’s why they used to go to see ghost-story dramas at Kabuki Theater in summer.

A young merchant had just watched ‘Yotsuya Kaidan’
(A ghost story at Yotsuya on the Tokaido.
It is one of the famous ghost stories since then.)
The drama impressed him a lot, so he was still in the mood of a ghosts’ world.
It was a beautiful moonlit night, but uncomfortably warm and humid, no wind at all.

“There must be two ghosts out there!”
He turned back and fled away from there.

Then he bumped into a villager.
He panted out the scary story to the villager,
“I’ve heard two ghosts counting bodies in the graveyard out there.”
The villager laughed it off,
“Are you dreaming or something?
I’ve never heard such a strange story.
I can’t believe you.
There aren’t any ghost in the real world.”

He felt a creepy sensation down his spine.
He looked back at the merchant again, who’d become much paler.
Without a word they started running away.
Yet they felt the voice coming after them.
“There are still two at the entrance.”