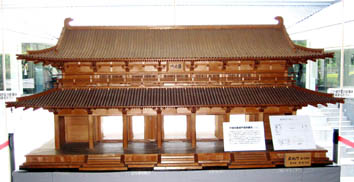 Long long ago, there stood a gigantic wooden gate called “Rasho-mon” at the south end of the capital, Kyo (Kyoto).
(‘Mon’ is a gate in Japanese.)
At the top of the gate, there was a huge room.
A steep, narrow and decayed ladder was attached to the gate to lead to the room.
A few people noticed that there was a ladder there.
But even not one, who noticed it, dare climb it because it was eerie and weird.

One day a man, who couldn’t make a living in the village, came up to the capital to steal something valuable.
He stood on the busy street called Suzaku Avenue, the main street, and watched people come and go.

“It’s still light outside.
It’ll take some more time for the sunset,”
he thought.
He had to find a place to hide himself.
When he passed through the gate, he happened to notice the upper part of the ladder.
He was curious about what it was doing there.
He carefully climbed up the ladder and found a large but dark space there.
There was a stench of dead bodies hanging in the air.
In the darkness, he saw a small candle in the corner of the room.
A dead woman lying on the floor right at the foot of the candle.
Not only that dead woman, there were other bodies, too!
Then he noticed someone or something moving there.
To his surprise, an old woman with gray hair was sitting beside the dead.
She had a bunch of hair in her hand.
What! She was pulling dark and long hair out of the dead woman’s head one after another!
He was startled.
“That old woman must be an ogre, or a ghost or… I’ll scare her, and find out what she is.”
He opened the door quietly, drew his sword, ran up to her, and cried loudly,
“Who are you? What are you doing here?”

The old woman was frightened and groveled at the feet of the man.
She said,
“This lady used to be my mistress.
She died yesterday, but there was nobody to hold a funeral for her.
So I had the body brought here to this room. “

“You are pulling her hair out, aren’t you? What for? ”
said the man.
“Her long hair attracted me.
I thought it would make a good wig.
If so, I could sell it to get some money.
Please forgive me.
Please spare my life.”
she begged the man for her life.

“Well, you’re dead if you won’t hand me the hair and your mistress’s clothes.”
She trembled, but somehow she managed to take off the body’s clothes, and handed them to the thief.
The thief said coldly to her,
“I need yours, too.”
The old woman took off her clothes.
“Hand me the hair, too. Hurry up!”
The thief put all the things into a big bag, and said,
“Keep still, or you’re a dead woman.”
He climbed down the ladder and disappeared into the crowded city with his bag over his shoulder.