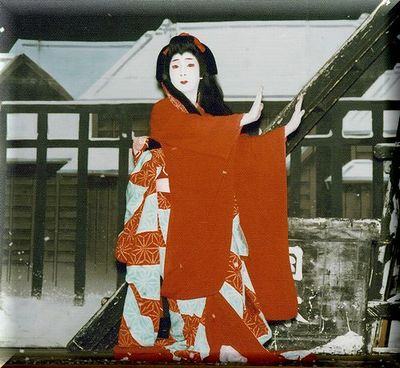 Most people in Japan live in wooden houses.
During the Edo era, those houses in Edo (Tokyo) stood much too close together.
So if a fire broke out, it could spread rapidly.
One of the big fires then was called ‘the Big Fire in Tenna’ or ‘Oshichi-fire’.

Once there lived a greengrocer named Hachibei in Hongo, a town in Edo, with his wife and daughter Oshichi who was then 16 years old.
She looked older than her age, though.
It was 28th of December 1682, when a fire broke out in a nearby temple.
“Fire! Fire!” people shouted and ran this way and that way trying to make their escape.
Hachibei urged his wife and daughter Oshichi to get out of the house,
“It’s getting windier.
It must be a big fire.
What is worse, our house is standing downwind of the fire.
It’s dangerous to stay here.
Let’s evacuate to the Kichijoji Temple.”
(It was in Komagome, where their ancestor’s grave was.)

“Run faster, or the fire will catch you!
Don’t stop!”
Oshichi was said.

She followed her parents and ran as fast as her legs could move.
The fire started burning around noon and was put out at around five the next morning.
It is said that over 3,500 people were killed in the fire.
Kichijoji Temple was already filled with a lot of refugees.
The mother happened to see a young man sitting in the corner of the room trying to take a splinter out of his finger.
She said to her daughter,
“Oshichi, that young man over there seems to have some troubles.
Maybe he got a splinter in his finger.
Go and help him take it out, while I greet the priest.”
The daughter approached him to offer a help.
She took his hand to examine.
Soon she said,
“I got it! Are you feeling better?”
He smiled at her and said,
“Yeah, thank you. You helped me a lot.”
The young man was working at the temple, as his parents asked the priest to look after him.
Hand in hand, the two young people gazed at each other for a while.
Eventually they fell in love.
“Oshichi, Oshichi, I’m coming,”
the girl’s mother called her daughter’s name.
“Oh, your name is Oshichi, isn’t it? I’m Kichisaburo,”
he said.
“Kichisaburo? Can I call you Kichi-sama?”
the girl said.
“Sure. Uh…I want to know a bit more about you.
Please write me a note and put it under that big stone there in the garden,”
he asked.
“Yeah, I will,”
she said and went away with her mother.

Oshichi and her parents were forced to stay in the temple until their house was rebuilt.
During the days, the girl shared happy hours with the young man exchanging letters secretly.
She found a letter written by him under the big rock in the garden and put her own letter there instead.

You don’t know how much I love you, and how I miss you!

How sad we can’t talk with each other even we’re staying in the same building!

The letter touched her.
She put it on her cheek, and said to herself,
“Kichi-sama. I want to be with you!”
One day, the priest had to go out to perform a funeral service in Asakusa.
He said to the young man,
“Look after the people in the temple, Kichi, while I’m away.
I’ll be home tomorrow.”

The girl happened to overhear the priest’s words.
“Only tonight will I be able to see Kichi-sama,”
she thought.

At midnight she slipped out of her futon and tiptoed to his room.
“Kichi-sama.”
she whispered and quietly opened the slide door of his room.

“Oshichi!”
he seemed to be surprised at her sudden appearance.
“Hush! Don’t make any noise.”
She put her index finger on her lips and slipped herself into his futon.
“No, you can’t.
I’m just 16 years old.”
He seemed to be embarrassed by her bold action.
“I’m already 16, too.”
“The priest will surely punish me.”
“I’m afraid of him, too.
But we won’t have any chance except for tonight!”
He couldn’t turn down the girl’s love.
“Oshichi! I wanted to see you so much.”
He hugged her tightly.
“Kichi-sama. I wanted to see you too!”
“Oh, how happy I am to feel you like this!”
“I will love you as long as I live.”
“Yeah, and we will be together in the next world as well.”
They spent the sweet time in futon talking with each other.
They wished the night had lasted forever.
‘Ding-Dong!!!’
Oshichi sat up in futon, when she heard the temple’s bell.
“The bell tells us it’s almost dawn. I’ve got to go,” she said.
Kichisaburo held her hands and said,
“Oshichi, if possible, I’d like to see you again.”

“Kichi-sama, I’m sure we’ll have another chance.”
On 25th of January 1683, Hachibei and his family were about to leave the temple as their house had finally rebuilt.
He expressed some words of thanks to the priest,
“I don’t know how to thank you for your kindness.”
“You’re quite welcome.
It is natural for Buddhists to help people in need.
Now you must feel at ease and return home,”
said the priest.

Oshichi, however, wasn’t happy.
She didn’t want to say good bye to Kichisaburo.
The young man knew that Oshichi and her parents were leaving that morning.
He wanted to see them off.
But he could only see them leaving from far away.
He whispered,
“Oshichi.”
Oshichi got the feeling that someone called her name.
She looked back, but she couldn’t see anyone.