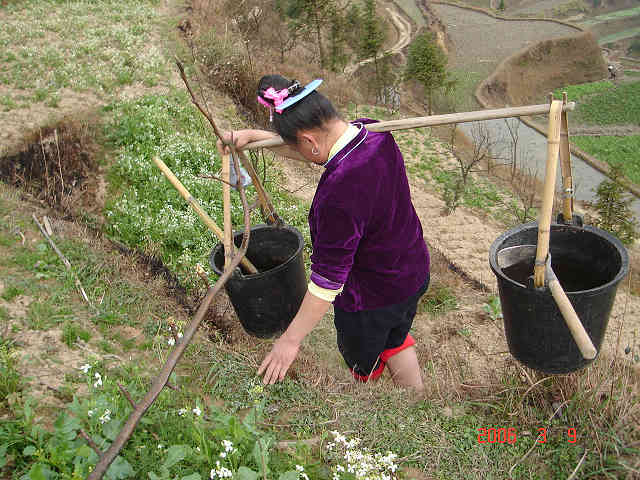 Long long ago, there lived a rich man in a big house with a beautiful garden in a mountainous area.
He had some servants working for him.
One of them was a young man who was responsible for filling the water jar in the kitchen.
From early morning till evening he went to the river near the rich man’s house, filled his tubs with water, and carried them on a shouldering-pole to the house.
He had a talent for balancing the pole with two tubs on his shoulder.
One day on his way back, the young man noticed that one of the tubs started leaking.
After a few seconds, he heard someone breathing a deep sigh.
“Who is it?” he wondered.
He turned to look back, but no one was there.
Then he heard someone speak out more clearly,
“Oh, dear, what am I to do?”
“Whoever can it be?” he asked.
“Oh, I’m sorry, sir,”
the unfamiliar voice replied.
To his surprise, the voice came from one of his tubs.
“What on earth is the matter?”
the young man asked the tub.
“Sir, I’ve started leaking.
I can’t keep the water any longer.
Look at my brother on the other side.
He keeps full of water perfectly.
I think he is proud of himself.
But I’m useless.
I’m ashamed of myself.”

“Don’t worry about it,”
he encouraged it,
“I can’t carry water without you and your brother.
You’re helping me lot more than you’ve thinking about.”

About a month later, he stopped on his way to the river, and said to the defective tub.
“Look down on your side of the trail.
I think you’ll notice something different.”

“Well, I can see some flowers among the grass, and butterflies flying over them,”
said the tub.

“You see, you leak water on our way back every day, so I took advantage of it and sowed the trail with flower seeds.
You know, I gathered them at the garden last autumn.
The water you’ve leaked has given enough moisture to the ground.
Look at the grass, flowers and butterflies.
Apparently you have given lives to them.
They look happy, enjoying their lives.
You may be a leaking tub as you say, but at least you’ve helped me create this beautiful trail.
You can be proud of yourself.”
The tub looked around, and said,
“Wow! I feel great!
I’ve never expected such nice compliments,”
said the tub cheerfully,
“You’ve given me confidence. Thank you so much.”