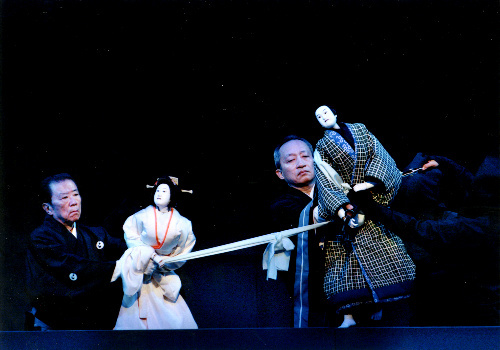 (A couple of fellow-prostitutes of Ohatsu are talking with each other about a rumor.)
Prostitute A: I hear Tokubei was kicked and beaten by his friends because he had done something bad for them.

Prostitute B: I’ve heard that he was bitterly stamped to death.

Ohatsu: Please stop talking about Tokubei.
I know it’s not true. He is alive and he has never done anything wrong.

(Ohatsu’s eyes are full of tears.
She catches a glimpse of her fiance outside.
She wants to run to him, but the fellow prostitutes are in the same room.)

Ohatsu: I don’t feel well. I think I need a fresh air outside.

(She slips out of the room, goes outside to meet Tokubei who is dragging his foot.)

Ohatsu: Does it still hurt you? I’ve heard several rumors about you.

Tokubei: I have been totally caught in a trap.
The more I struggle, the worse off I am.
Everything has gone worse for me.
I’ve lost the hope to live.
I’ve come here to say an eternal goodbye to you.

(Tokubei whispers in tears. They heard a voice calling Ohatsu.)
Ohatsu: My mistress is calling me. We can’t keep talking any longer here.
Will you follow me and do as I tell you?

(Ohatsu hides Tokubei under the skirt of her nightgown and leads him under the porch of the steps.
She sits on the porch and pretends to be calm.)

(Kuheiji and his friends burst into the room.)
Kuheiji: Hey, Ohatsu. It looks like you are free.
I’m going to buy you, what do you think?
Don’t you like me? Oh, I have something to tell you.
Your boyfriend tried to cheat me with a false bond and a seal I had lost before.
Don’t trust him even if he tells you the opposite.

(Tokubei, hiding under the porch, trembles with anger.
Ohatsu, who is afraid that he may jump up from the hiding place, calms him with her foot.)

Ohatsu: It’s you who are telling a lie. Tokubei and I have been on good terms for years.
He has told me everything.
There’s no secret between us.
You’ve deceived him, haven’t you?
Unfortunately he has no way to prove his innocence.
I know how he is feeling now.
He won’t have anything else to do but kill himself.

(Ohatsu cries. Arguing with Kuheiji, she is, in fact, talking to Tokubei, who takes her ankle and kisses it to show that he is determined to commit suicide)

Ohatsu: I know! I know! Only the death will wipe out our dishonor.
I can no longer wish the life without you.
I’ve also determined to kill myself with you.

(She speaks loudly with tears flowing down her cheeks.
Kuheiji feels something ominous in her and says to his gang-fellows.)

Kuheiji: Let’s get out of here. This place is gloomy.
Let’s drop in at the liquor restaurant and have a drink there.

(No sooner had they left there than the host and his wife tells the prostitutes to put out the lights and go to bed.)

Ohatsu: Probably I’ll never see my master and mistress and my fellow people.
It’s two o’clock in the morning.
I’ll wear a white kimono for my death-journey.

(Ohatsu quietly descends the stairs and finds Tokubei standing by the front door.
She holds him by the hand and leads him to the gate.
They look at each other and sob for the destiny where they will die together.)

Scene 3 A Scene on the Road

Tokubei: Let’s make an eternal vow to be a husband and a wife on this Bridge.

Ohatsu: I promise. I’ll be your wife forever.

Tokubei: Tomorrow we will be in the talk of the town.
It’ll be better to die before dawn.

(In the wood of Sonezaki Shrine.)
Ohatsu: You are 25 while I am 19.
We are still young, but the bond between us is stronger than anything else!
We’ll be reborn in the next world.
It is strange that this is our unlucky year.
But I feel happy to die with you.

(They arrive at the thick wood of the Shrine.
They see something flash in the dark.)

Ohatsu: Wow! What was that?

Tokubei: That was a human spirit!
I thought we would die alone, but someone had already died tonight.
Now let’s hurry. Don’t miss the time to die.

(They, hand in hand, find their way in the dark.)
Tokubei: Here we are. This is the best spot for our journey.

Ohatsu: How happy we are to die together!
I’m bringing a razor with me lest I separate with you on our way.

Tokubei: How wonderful you are to think of that!
We’ll be an example of a lovers’ suicide.

(He binds her with her sash to a tree firmly so that she couldn’t move.
She looked him in the eyes and so did he.
They burst into tears.)
Tokubei: This is the end of our miserable lives!
My parents died when I was a child.
Father, Mother, I’ll be with you soon.

Ohatsu: You’re lucky.
My father and mother are still in this world.
I haven’t seen them for years.
The news of our suicides will reach them tomorrow.
How sad they will be!
Good bye, Mother and Father!
I’m ready, Tokubei.
The time has come.
Kill me quickly! …Save us merciful Buddha!

(Tokubei draws his dagger and sticks her throat in one push after hesitating several times.)

Tokubei: …Save us merciful Buddha!

(Tokubei pushes the blade deeper and deeper.
Her last agonies of death are beyond description.)

(He thrusts and twists the razor, which she had in her hand, in his throat.
His eyes grow dim and they have their last breaths.)