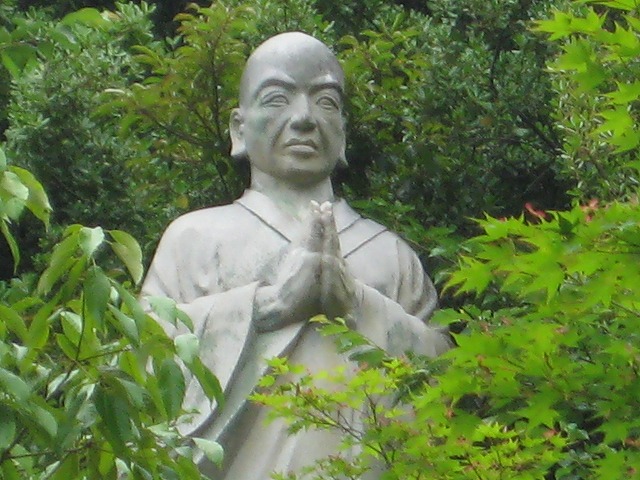 Long long ago, there lived a priest in the suburbs of the capital.
One of the priest’s daily works was to preach.

One day, while he was preaching, he noticed that the people coming to the temple were decreasing.
He thought it was necessary to do something about that.

So one day, he said to the people after he preached,

“In the near future, I’ll commit suicide by jumping into a river and leave this world.”

They all were surprised, and asked him the reason he had to do it.
He answered,

“I’m worried about people who have done bad things.
I want to save their spirits from falling into hell after they leave this world.”

They asked him again when he would plan to practice it.
He thought for a bit and said,

“Before practicing it, I need to purge myself of sin by chanting sutras for a hundred days at my temple.”

The rumor spread all over the capital.
People talked with each other,

“The priest at that temple said he would commit suicide by throwing himself into a river in order to save us.”

“He must be a great priest.
We had better pray to him for our happiness while he is still alive.”

The number of people coming to the temple was increasing more and more.
The street to the temple was full of people who wanted to listen to the priest’s preaching.
The priest felt very happy to see them, but gradually worried about his committing suicide he happened to have declared to the people.

The day he’d promised to do it was coming around the corner.
But he couldn’t show his worries on his face.
He sat still in front of the worshipers every day, gave a preaching, chanting the sutras with his eyes half closed.
Whenever he opened his eyes wide, he turned his face toward the crowd.

“Look! He opened his eyes wide.
What an awe-inspiring look he has!”

worshippers looked at his face, and whispered with each other.

In the evening he stood up calmly and disappeared into the inner room.

After a hundred days of asceticism, the big day he had to throw himself into the river came at last.

Curious onlookers had already gathered along the river bank.

When the priest arrived at the bank, they burst into cheers.
The priest got onto a small boat with a boatman and the boat went into the middle of the river and then stopped.

“It’s too bright for me to commit suicide.
Let’s wait for the sunset.”
the priest said to the boatman, and looked down at the water for quite a while.

The priest was still watching the surface of the river from the boat.
He didn’t show any movement.
The people gathered on the river bank began to get tired of waiting for the priest’s practice.
Some of them couldn’t be patient anymore.
One spectator after another began to leave, but still quite a few people remained there, and started criticizing him.

“I’d like to see his end with my own eyes, but how long must I wait?”

“Why does he need so much time after he’d decided to commit suicide firmly.”

“It seems he is reluctant to die.”

In the meanwhile, the evening sun set completely.
The priest stood up on the boat.

“At last the time has come, the priest will throw himself into the river!”

they shouted and clapped their hands.

The priest took off all his clothes but a loincloth.
He put his palms together and jumped into the water feet first.

His body sank into the water once, but it moved up and down and soon floated to the surface.
Then he began to flap his arms and legs toward the river bank.

“It seems the priest has regretted his words and wants to be alive longer in this world,”
one of them said as he grabbed the priest’s hands to pull him up on the bank.
The priest said to the man with his hands together,

“Thank you very much for saving my life.
I’ll never forget your kindness.
I’ll pay you back in the next world.”

All the people there were disgusted and started calling his names,

“You didn’t think of committing suicide from the beginning.”

“We were completely deceived by you.”

Some of them picked up a handful of small stones and started throwing at him.

“Ouch! Ouch!”
The naked priest ran away with his head covered by his hands.