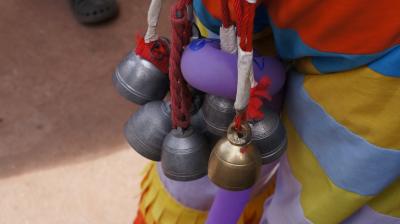 Long long ago, there lived a God in the northern region.

One day, North God left his place for a long, long journey.
He was going to visit his friend, South God, living in the Southern region.
South God had a daughter of marriageable age, and North God was going to get married to his daughter.

It was already dark.
He had to find a place to sleep.
Soon he found a big tile-roofed house with a stately gate and a couple of storehouses.
It seemed like the owner was a rich person.
He entered the gate and opened the front door.

Hearing it, a man in luxurious clothes appeared at the door.
Although he was rich, he was so stingy that he was sometimes called a cold-blooded man.
Giving the stranger in a shabby outfit a quick glance, the stingy man said,

“I don’t think I need to talk with a stranger like you.”
saying so, he shut the door rudely.

The God was at a loss where to go and wandered around.
Soon he found a hut with a thatched roof.
He knocked on the door and heard an answer inside.
He opened the door and saw a man in shabby clothes.
The God said to him,

“Excuse me, but I’m a stranger here.
I am looking for a place to sleep tonight.
Would you mind my staying here?
I don’t care even if I have to sleep in a corner on the earth floor.”

“Come in! As you see, it is cramped and untidy here but if you don’t mind, why not stay at my place?”

North God had visited the mean man a few minutes before, and was treated like a stray dog, but soon he found a kind man who willingly invited him.
Actually the kind man was the mean man’s younger brother.
The man and his wife welcomed the God and kindly got him seated on the straw mat.

The wife said to the God,

“You look so hungry.
Please eat this porridge before it gets cold.”
saying so, she served him a cup of millet-porridge.

“Thank you very much for your warm heartfelt service. I’m willing to eat.”

The God ate the hot meal with content and enjoyed talking with the couple until he went to bed.

Several years had passed since he stayed at the couple’s that night.

One day a traveler with a beautiful wife and eight little children visited the kind man’s house.

“I have visited you once before and received a warm welcome from you.”
The man standing in front of the door was North God himself, who had a mustache and looked quite different from what he had used to be.
The woman with him was the daughter of South God and now Northern God’s wife with eight children.

“I am going to go back to the Northern Region.
Today I visited you to express my sincere thanks for your having welcomed me before,”
said the God.

“The pleasure is mine.
Do come in and take a rest,”
said the husband.

The wife served cold water to them.
It being a hot day, it was the nicest hospitality.

“Delicious! Thank you very much again,”
said the God.
“I’ll repay your kind service with good advice.
Please make a ring made of reed and wear it around your waist and write your name on the front door, and you’ll be able to live a happy life even if a serious disease should break out or misfortunes happened in this neighborhood.”

Saying so, North God and his family left there.

It was not long before serious disease got prevalent in the neighborhood.
The stingy rich man and his family were affected by the disease and lost their lives.
Nevertheless the kind couple who had worn the rings around their waists and written their names on the front door were in good health.

After that, the villagers, believing the rumor, made reed rings and wore them around their waists and wrote their names on each door in summer.