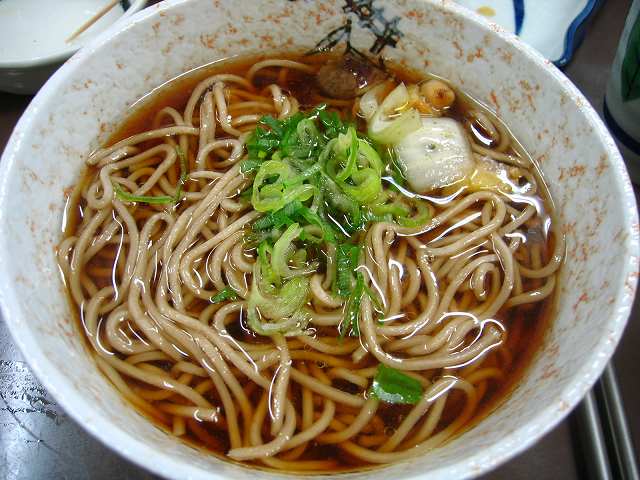 It was the 31st in December, or New Year’s Eve.
It happened in a soba restaurant ‘Hokkaitei’in Sapporo, Hokkaido.
For every soba restaurant, the last day of the year is the busiest and the most prosperous season.

At Hokkaitei, they were also extremely busy working from morning till night.
However, after 10 o’clock in the evening, there were only a few customers left in the restaurant, and no more new customers came to Hokkaitei.

Thinking it was a good time, instead of the owner, a person who was truly kind but unsociable, the owner’s wife, who was called ‘Okami-san’ by their regular customers, let their part-time workers go home with a full-house bonus, special money for a busy day, and some soba-noodles for their family.

The door was opened slowly when the soba restaurant was ready to close as the last customer left.
A woman in a checkered half length coat which was out of season, and two children, one boy who was about 6 years old, and the other 10, wearing matching new sweat suits, entered the restaurant.

“Hello. May I help you?”
the owner’s wife said.
The woman hesitantly said,

At her back, two children were anxiously looking up at their mother.

She led them to the table nearest to the heating, and said to her husband at the counter out loudly.

Glancing at the three people, he answered her,

“Okay, one kake!” and boiled one ball of raw saba and a half in a pan.

One ball of raw soba is for one serving.
Without letting them notice, he finished boiling one and a half ball of soba for a serving bowl.

A few minutes later, three people at the table were putting their head together, and chatting over the bowl of soba.
Their voices slightly reached the counter.

“Have some, Mom,” said the little one, and held one piece of noodle to his mother’s mouth.

After finishing it, they paid 150 yen for a bowl of soba, said,
“Thank you very much. We enjoyed it,” bowed and left.

The owner and his wife said unanimously,

“Thank you very much! Have a Happy New Year!”

They were busy as usual every day the following year, and soon the day of December 31st came around again.

It was a busier day than the one in the previous year.
When the clock struck ten, and just when they were going to finish working, the door opened and a woman with two boys came in.

The owner’s wife remembered the last customer of the previous year when she glanced at her checkered half coat.

She led them to the same table they’d sat the previous year and said to the owner loudly.

“Okay, one kake!” and relit the stove he’d just put out.

“Hey, how about making three servings for them as a discount?”
she whispered into his ear.

“No. If I do that like that, they’ll be concerned about it.”
he said, boiling one ball and a half of raw soba in the pan.
Seeing it, the wife smiled and said,

“You are a good guy, even if you look sullen.”

He said nothing as usual and served one and a half balls of soba in one serving bowl.

The two, standing on each side of the counter, overheard what the mother and her sons were saying over a bowl of soba at the table.

“Mom. We have been able to eat soba at Hokkaitei again,”
said the other.

“I hope we can have it next year,” said the woman.

After finishing it, they paid 150 yen, and left.

“Thank you very much! Have a Happy New Year!”
the owner and his wife said to them: the same greetings they repeated many times that day.

Their business had been going well the next year, too, and New Year’s Eve came again.
It was over half past nine in the evening, since around that time, they didn’t talk with each other, but Hokkaitei’s owner and his wife were both nervous and couldn’t settle down.

When it was past 10 o’clock, the owner let his workers go home, and flipped over the price cards on the wall one by one which were raised in price just this summer: ’200 yen for kake-soba’ was quickly changed into 150 yen.

The ‘Reserved’ seat card had already been put on the second table by the wife.

It was 10:30 when the three—the mother and two boys—entered as if they had been waiting for the stream of customers to end.
The older boy was in a junior high school’s uniform, while the little one was in his brother’s hand-me-down jumper; though it was a little larger for him. But the mother wore the same faded checkered half coat.

‘Hello. May I help you?” the owner’s wife smiled at them.

She led them to the same second table, while subtly removing the ‘Reserved’ card.
She said to her husband loudly.

“Okay ,two kake!” and put three balls of raw soba into the pan.

From the three people’s cheerful laughing, they must have had a lively conversation over two servings of soba.

The wife exchanged glances with her husband and smiled when she heard their lively conversation.
The owner nodded with a sullen face.

“Sons, I’d like to say thank you to both of you,” the mother said.

“To tell the truth, eight people were injured by the accident your late father had caused…I’ve paid them 50,000 yen every month that wasn’t covered by the car insurance.”

“I’ve known about it,” said the older son.
The owner and his wife couldn’t move but just listened to them.

“The due date for the last payment is next March.
But I paid all the debts today.”

“Wow! You really did it, Mom?” said the older son again.

“Yes, I did. Jun has shopped and made supper every day, and you have delivered morning and evening newspapers.
Thanks to both of you, I’ve been able to work without worrying about anything.
They gave me a special allowance for my hard work.
That’s why I could finish paying all of our debt.”

“Mom, Bravo! I’m very happy to hear that.
But I’ll keep making supper from now on,”
the little one said.

“I’ll keep delivering newspapers, too.
Jun, let’s do our best!”
the older one said.

“Thank you, thank you very much, guys!”

“Now I think it’s time to uncover our secret.
Jun and I have kept a secret from you.
That’s…do you remember the information from Jun’s classroom teacher?
It said there was a parents’ visiting day on a Sunday in November…Jun’s teacher handed him one more letter to you the same day—’Jun’s essay was chosen among the ones in Hokkaido, and it will be sent to the National Essay Competition.
So I’m planning to have Jun read his essay on parents’ visiting day.—Jun hid the letter from you as he was afraid if you knew, you’d be absent from work.
But Jun’s friend told me about that, so…I went to his class that day instead of you.”

“The teacher said that she’d told all of her students to write an essay titled ‘What do you want to be in the future?’ and that Jun wrote ‘A bowl of kake-soba’ as his essay.
Then she had him read his essay.

In the essay he wrote about our Dad who died in a traffic accident, and that it caused a large debt; Mom worked from morning till night; and I delivered newspapers…he read about all these things.

And then at night on December 31st, three of us ate one bowl of kake-soba…
How delicious it was!
One bowl of kake-soba for three people…but the owner and his wife said to us with a loud voice, ‘Thank you very much. Have a happy New Year!’
It sounded to him as if they were telling us ‘Don’t give in! Good luck! Manage to survive!’

Then Jun read it out loud that when he grew up, he would become a soba restaurant owner who could say to his customers with a loud voice,
‘Good luck and a happy life!’”

The owner and his wife, who had been overhearing their conversation behind the counter, were crouching down and sharing both ends of a towel to wipe their tears.

“After Jun finished reading his essay, his teacher said, instead of Jun’s mother, his brother is here. Let’s ask him to give us some words.’”

“It was an unexpected request, so I couldn’t speak a word at first, but… Boys and girls, Thank you for getting along with my brother Jun…he makes supper every day, so I’m afraid he gives you a lot of trouble because he has to return home in the middle of club activities.
Just after he started reading his essay ‘A bowl of kake-soba’, I felt embarrassed.

But when I saw Jun holding his head high, and listened to him reading his essay loudly, I realized…the more embarrassing thing must be…the fact that a bowl of kake-soba was embarrassing my mind…

I have to remember our mother’s courage to have ordered a bowl of kake-soba that day…Jun and I will cooperate to help our mother.
And then I asked them, ‘Will you keep having a good friendship with Jun?’”

They were eating their New-Year’s Eve soba merrily: quietly they held their hands with each other; Laughing and patting each other’s shoulders—totally different from previous years—paid 300 yen and bowed deeply, saying,
“Thank you very much. We enjoyed it.”

“Thank you very much. Have a Happy New Year!”