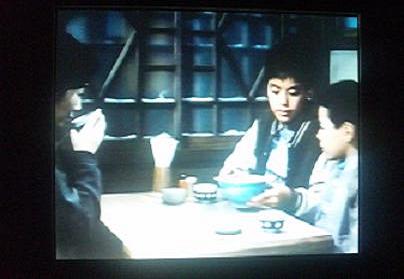 Another year had passed―

The owner of Hokkaitei had it remodeled, and got new tables and chairs.
But the old second table and chairs were left there.
They were surrounded with the new ones.

“Why are the old table and chairs here?”
some customers puzzled.
The owner and his wife told them about the episode of ‘a bowl of kake-soba’ and added that keeping the old table had encouraged them, and that some day when the three customers came again, they wanted to have them sit at the table.

The story was spread around among their customers as a happy table.
In fact the table was becoming popular: some girl-students came a long way to eat soba there; some young couple ordered after waiting for another customer to leave from that happy table.

On New Year’s Eve some years after, the owner’s friends, who had been associated with each other as if they had been their own family members, finished their work for the day and gathered one after another.

They had their annual event that they had kept for several years: to eat year-end-soba at Hokkaitei and visit the nearest shrine with all of their friends and families, listening to the watch-night-bell.

After 9:30, the fish store owner and his wife entered at first with a big plate of sashimi, then over thirty regulars, some with sake while others with side dishes, came over, and the atmosphere was livened up.

They all knew about the second table’s episode, but never spoke out that the people expected wouldn’t come again.
Even so they didn’t sit at the reserved table for New Year’s Eve.
They sat shoulder to shoulder in the narrow tatami-room space beside the table to let later comers join.

When it was after ten o’clock, the get together was enlivened: some were enjoying eating and drinking, helping the owner cook, and taking some thing from the fridge; some others were talking about a great year-end sale, and of going swimming in the sea, having a grandchild, and so on.
Then the front door opened.
All the people stopped talking, when some people looked at the front door.

Two young men in jackets with coats in their hands entered the soba restaurant.
They all sighed and the lively atmosphere came back again.
Just when the owner’s wife apologetically tried to tell the new customers that all the seats had been occupied, a woman in kimono came in and stood between the two young men.
All the people had their breath taking away and pricked up their ears.

The owner’s wife changed color when she heard her voice.

The memory that she’d never forgotten ― some ten years ago, the mother and her two sons showing up ― came back in her mind.

She glanced between her husband whose eyes were wide open in a stare, and the three people who just entered.

One of the young men said to her.

After that, we moved to Shiga Prefecture where my mother’s parents had lived.
I’d passed the National Examination for Medical Practitioners this year and have worked at the Kyoto University’s affiliated hospital as a resident pediatrician, and next April, I will work at the Sapporo General Hospital.
I came to Sapporo this time to meet people who I’ll work with in the hospital for the first time, and visit my father’s grave to tell him.
I talked with my brother, who actually didn’t become a soba restaurant owner, but works at a bank in Kyoto, about the most luxurious plan in our life…… to visit Hokkaitei with our mother on the night of the New Year’s Eve and order three bowls of kake-soba.”

Tears welled up in the owner and his wife’s eyes while they were nodding and listening to the young man.

Listening to him, a grocery store owner, who was eating soba at the table near the front door, swallowed, and stood up.

“Hey, you! Why are you hesitating?
You’ve been waiting for the New Year’s Eve ten-o’clock-reserved-seat customers for ten years.
This is the moment. Lead them to the table!”

The owner’s wife who’d been patting the grocery store owner on his shoulder, collected herself, and shouted,

“Hello! We’ve been waiting for you!
Come this way, please. Hey, three kake to the second table!”

“Okay, three kake,” answered the owner with a sullen face which had been covered with tears.

Unexpectedly a shout and applause arose among the people in the soba restaurant.

Outside, the light snow, which had been falling a while before, let up, and the new January’s wind was blowing to the Hokkaitei’s noren
(A noren is a split half-curtain hung over the entrance or under the eaves of a store, a restaurant or a Japanese-style pub.
It serves as an advertisement since the name of the store or brand name is dyed on it. ),
which was lit by the light’s reflection from the fresh snow.